The Azure window is one of Malta’s most amazing natural sites.  Situated on Gozo, the Azure Window is a large natural arch that sits majestically over the Meditteranean sea. The constant thrashing of the waves against the rocks and between the arch make this natural beauty all the more dramatic. The Azure Window is well worth visiting if you are taking a holiday to Malta.

The window formation was created thousands of years ago when two limestone caves collapsed. Being a natural formation the Azure Window is constantly evolving and the arch is in fact disintegrating due to the harsh waves and winds. Pieces of rock occasionally fall from the arch and it is believed that the arch may disappear altogether eventually. Some experts believe this could be in just a few years. It is for this reason that visitors are strongly warned not to walk across the arch, although many just can’t resist! When the rock does lose its arch, the Azure Window will be named the Azure Pinnacle.

The Azure Window is a completely free natural attraction and this means that you can get up close to it and enjoy scrambling on the nearby rocks to get some great photos. It is also well worth taking the boat trip from nearby Inland Sea, which just takes about 15 minutes but gives a fantastically different perspective of the rock. You also get to see some of the nearby caves and fantastic coastline without having to negotiate any rocky paths.

Such a beautiful site, the Azure Window has featured in several films including; Clash of the Titans (1981) and The Count of Monte Cristo (2002). It has more recently appeared on Game of Thrones, the massively popular HBO series.

If you have a car the Azure Window is easy to find, but if not you can also see the Azure Window if you book on to one of the Hop on Hop off buses. We urge anyone who is visiting Malta to take a trip to this wonderful natural attraction and see it in it’s full glory, before it’s too late! 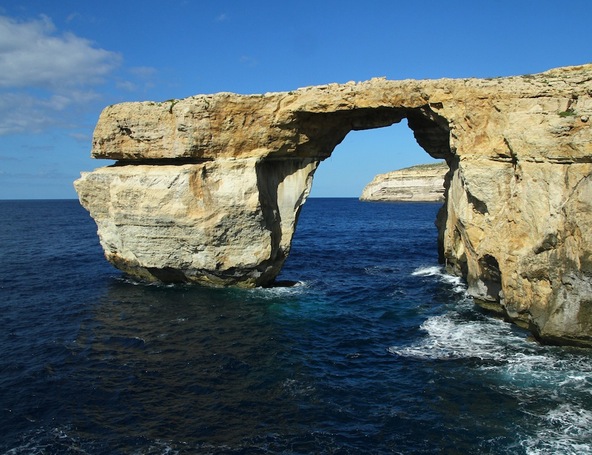